WellStrong is honored to be selected once again as one of the charities benefiting from this year’s 3rd Annual Charter Cup Fishing Tournament! 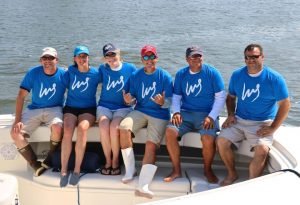 The Annual Charter Cup Fishing Tournament donates 100% of proceeds to benefit local charities that are involved. The tournament has raised over $126,000 since the 1st one in 2017.
This year’s tournament will be held on Wednesday, July 17, 2019 at Baxter’s Fish & Chips in Hyannis, MA. The tournament will have 11 boats raising a minimum of $2,500 for their chosen charity.  WellStrong’s boat will be captained by Bruce Kelly, owner of Bay Colony Concrete Forms and Bill Gibson, owner of Gibson Waterproofing.
Last year WellStrong’s boat raised $30,000, help us to reach this goal again by CLICKING HERE TO DONATE
Amy Doherty2020-06-21T01:24:18+00:00June 27th, 2019|
Page load link
Go to Top