A journey from near homelessness to hope.

Connor is a Cape Cod native. He grew up with a supportive family and good friends. He had big dreams for his future like most of us but also a nagging voice that told him he was different. Drugs and alcohol quieted that voice and by the end of Connor’s junior year in High School he knew he had a problem. His disease progressed rapidly and in a short time he was addicted to opiates and surrounding himself with people who used drugs and drank like he did. He attempted to control his drinking and drugging and earnestly sought treatment multiple times to stop but after each attempt found himself resorting back to drugs and alcohol in a short amount of time.

Connor began riding his bike during the peak of his active addiction as a mode of transportation. Some days he would ride his bike over 20 miles to be able to support his drug habit. Eventually Connor came to the place all those in the depths of darkness need to eventually find themselves to begin the journey in recovery: rock bottom.

After completing his final stint in treatment in 2013 Connor began the journey of surrender that would ultimately lead to a thriving life in recovery. Connor credits his ability to find his path in recovery to the many supports and people he has engaged and befriended along the way. From learning the basics of adult responsibility in treatment (making his bed, doing laundry, etc) to expanding his awareness and building a faith centered in spiritual practices like yoga and meditation, Connor is thriving in life and has not only risen but soared above the confines of his former self.

As Connor grew in his recovery, his aspirations to travel took hold. In 2017 on a trip to Egypt a chance encounter with a few cyclists planted a seed that later grew into an idea for a long-distance bike ride. With little experience, ample research, and maximum faith, Connor embarked on a 2500-mile bike ride around Asia with stops throughout India, Nepal, Thailand, and Cambodia. Connor’s words about this trip echo the sentiments for many embarking on the journey in recovery: “I went into this with little experience. I just had faith I could do it. And I found on my trip when I didn’t have faith, I found other people who did”.

Connor arrived back on Cape Cod from Asia shortly before the country went into lockdown. One day while working Connor was struck with an idea to ride his bike across the country. That thought was immediately succeeded by an idea to make his trip one that raised awareness about substance use disorder while raising money for charity. This is where WellStrong and Connor begin their work together. WellStrong is a nonprofit based in Falmouth, MA whose mission is to create safe, supportive communities of people in recovery from substance use disorder through fitness, wellness and meditation. WellStrong is so excited to support Connors journey and can’t wait to see it unfold in real time.

Here’s what Connor has to say about why he’s doing this:

“I’m not a pro. I don’t follow a strict training. I’m not in the best shape ever. I also don’t always want to ride or wake up early or go the extra mile, but when I do it pays off. When I set out on this ride, I’ll be doing things I don’t want to do every day; things that aren’t comfortable or pleasurable. But it’s through the struggle and the pain that we emerge on the other side. All the best things in my life have come from walking through my fears and doing what I don’t want to do.”

Whether you are in recovery, seeking recovery, or just intrigued by the idea- we can all find a little inspiration through Connor’s story. 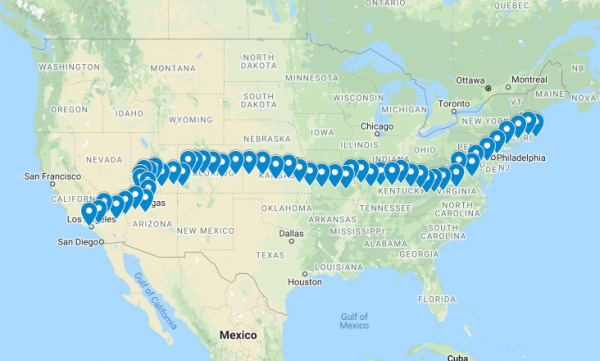